The Kenwick Galleries in Beecroft, NSW, was established in 1969 by potters Joan Beaston and Billie Brown. The name Kenwick came from the names of their husbands, Ken and Wickham. Since this time it has undergone a number of ownership changes and 'moved around' within the Beecroft area but finally it happened that the last owners retired and the business was closed for good in 2007

The gallery provided craft artists and painters from NSW and interstate with a venue for displaying and selling their work.

We do not know the potter who threw this vase but do know it was sold though the gallery, that is where we bought it! Beecroft was nearby to our suburb and was often visited to see "what was on offer"

I cannot recall the exact year but after thinking long and hard, I would put this as somewhere in the 1980's and certainly no later than around 1994 as this is when the Sydney telephone numbers changed to having a '9' added to their existing telephone number and the Gallery label is using the old numbering system.

Brown/Cream clay with light speckles throughout

Design is of an Australian Red Flowering Gum, probably (but not definitely sure) the Corymbia. 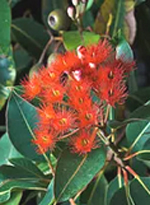 The creator of the vase nor the artwork is unknown, it is most likely this vase was offered through the Gallery on commission. It really doesn't matter, we liked it and it fitted well with our love of Australian landscapes, in particular the good ol' Gumtree.

Well proportioned and made (symmetrical)

Scalloped top lip with a nice wide opening for the flowers

Weight: 850g (this makes it nice and stable)

There has been no stamping or writing on the base by the artist, with only the Kenwick Galleries paper stick on label being in place. The text of the label is:

Beecroft is a beautiful leafy Sydney suburb in the North West area.

NO discolouration to the clay or the artwork decoration

NO wear apparent to the artwork

We only used this vase a couple of times (a bit small for some of tall cut flowers we had from time to time), the inside is clean.